The beginings of the cashless society is being  trialed right around Australia under the guise of  helping  children and families.

The indue cashless debit card trials are not against the law but they are ! morally corrupt. 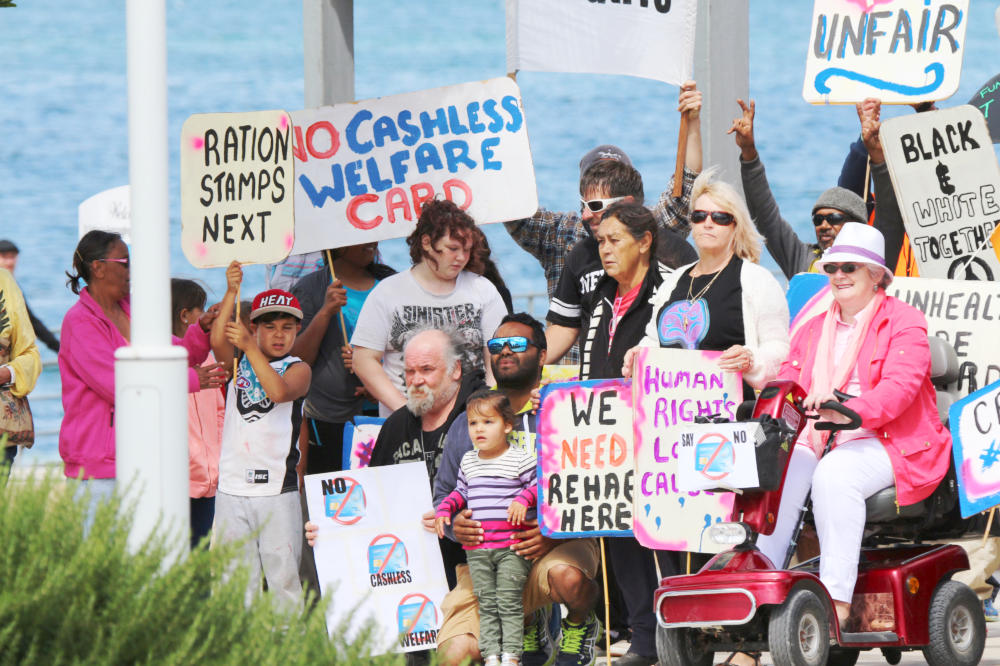 Does it pass the pub test.

The Liberal National Party (‘LNP’) welfare card program is really a LNP rort for the benefit of the Liberal and National Parties and their members, donors and supporters. Indue Pty. Ltd, the corporation awarded the contract to manage the welfare card program and to operate its underlying systems, is a corporation owned by Liberal and National Party members and that donates to the Liberal and National Parties.
The Former Chairman of Indue is none other than former LNP MP Larry Anthony who is the son of former Liberal Country Party Deputy Prime Minister Doug Anthony. Other companies now owned by Larry Anthony, or by the corporate trustee of his family trust, Illalangi Pty Ltd, work under ‘sub’ contracts for Indue itself and make their profits from dealings with Indue in the course of Indue performing its contracts with the Government.

These corporations are SAS Consulting Group Pty Ltd - a political lobbying group that counts Indue as a client - and Unidap Solutions Pty Ltd - an electronic digital IT services corporation that provides Indue, and the current LNP Government directly, with various IT services.

This network of corporations and trusts is standard practice for those wishing to conceal their involvement in an enterprise or operation and is often engaged to shield a person’s involvement in an enterprise. This is the real purpose of the LNP determination to adopt and expand the welfare card program, that is, to obtain donations for the financially stressed LNP. The Liberals had significant amounts withheld from them by various Australian electoral commissions in 2016 due to their failure to properly report the political donations they received.

The Liberals have shown a propensity to manipulate electoral donation laws as their recent dealings with the various electoral commissions in ‘the ‘Sinodinos Affair’ and Joe Hockey’s ‘North Sydney Forum Affair’ indicate. Likewise previous Liberal scandals involving tax payers money being used to attract donations to the Liberal Party include Turnbull’s $10 million tax payer funded grant for donation in the Rainmaker deal with a member of his own Wentworth Forum and John Howard’s and Julie Bishop’s involvement with the Austrade grant and donations deal in the Firepower affair. More recently we have seen the Liberals embroiled in electoral allowance scams which evinces a flagrant disregard for proper management of and accountability for public financial resources under their stewardship.

Moreover, it is common knowledge that the Liberals also need to repay their current parliamentary leader, Prime Minister Malcolm Turnbull, the $1.8 million he loaned to them for the 2016 election campaign - not to mention other loan amounts he has advanced to them in the past. It is reported that the Liberal Party is in debt to the tune of approximately $39 million.

Consider these facts. 1. The welfare card program does not produce savings for the government but adds another level of administrative bureaucracy and cost on top of the welfare payments system. In fact, the new look Welfare Card, which is a revamp of the former Basics Card, costs upwards of $4,000 person to implement and manage and the previous Basics Card cost $6000 per person. That is, for every person compelled to use the card the Government will also pay Indue upward of $4,000 each. That’s $4,000 that could have been spent on that person directly or as a contribution toward the provision of services to communities with health, educational and employment needs or on reducing the alleged government debt.

If every person receiving unemployment benefits were placed on the welfare card the cost to the tax payer of the administration of the card alone, not including the actual welfare payments made, would be approximately $3.2 billion more than the cost of the current payment system. That money will be paid to Indue, or to any other private card provider or crony of the LNP Government that it wants to lavish with public funds, but not to those in need. That is $3.2 billion that could have been used to reduce the budget deficit or spent on health, education and work programs for all Australians.

If the recipients of other types of benefits, such as pensioners and family tax benefit recipients, are also compelled to participate in the card program then the cost to the taxpayer and Government coffers would be billions more again. Remember, this is an additional cost on top of the welfare payments that need to be made to recipients and that these additional administrative amounts per person are paid to Indue as the manager and operator of the card system and not as income support or on services for those that need it. While incurring these additional costs, the card program does not displace any existing welfare costs to the Government or taxpayers because Centrelink and the Department of Human Services staff, who are responsible for welfare payments, were retrenched en mass years before the Welfare Card was introduced.

Despite having this reduced staff, the Department still managed to maintain welfare services and payments without the need for intervention by a private operator such as Indue. On that basis, the card program is more costly than the system it is intended to supersede and replace as it requires the Government to pay high per person administration fees to the private operator Indue without displacing any existing costs sustained by the Government. Rather than reducing the alleged budgetary deficit, the card program worsens the budget deficit and creates no savings for the government at all. With this in mind, it is now clear that the true purpose of the $4.5 billion amount that the LNP Centrelink ‘Robo-Debt’ claw back campaign is targeted to recover from welfare recipients is the cost of implementing the welfare card across the whole country to recipients of welfare of all forms and not just to the unemployed.

This claw-back would enable the Department of Human Services to balance its departmental budget by offsetting the outgoing administrative costs of the welfare card by reducing payments in other areas. These administrative costs are funds from the Department of Human Services and welfare budget that were obtained from Government coffers for the purpose of providing income support to the people who need it and not for the purpose of passing those public funds on to private corporations closely connected to the LNP as profits and fees.. Under the LNP, Government contracts are now being awarded on a ‘limited tender basis’ at a frequency greater than they have ever been in history. This enables the LNP to award Government contracts to their crony mates on ‘commercial in confidence’ terms, and, thus, with an immunity from freedom of information laws, who then donate some of the profits earned from those Government contracts back to the LNP as tax deductible donations.

The latest Government contract to Indue was with the Department of Human Service for $850,000 worth of ‘benefit cards’ over the whole of 2017. This is an amount of money to produce cards for all unemployment benefit recipients with some left over. The latest contract between Department of Human Services and Indue was awarded on a ‘limited tender basis’ sometime before 1 January 2017, that is, before the trials for the card had concluded and been assessed. In fact, it was awarded without any tendering at all. Larry Anthony continues to benefit from the Government contracts with Indue as he shares in the profits earned by other companies that he has interests in, SAS and UniDap, by way of their dealings with Indue.

This is not what occurred. Rather, the contracts were awarded to Indue before the trials had even been completed, let alone before their outcomes were assessed. It is open to conclude from this that the Government contracts were going to be awarded to Indue regardless of whether the purported health and social outcomes and objectives of the card program were achieved. This indicates that the positive health and social outcomes stated for the card program are not, and could never have been, the actual purpose of the card program nor the reasons why a Ministerial decision was made to award more contracts to Indue.

There is no evidence that the health and social outcomes claimed for the welfare card have been achieved. Despite touting cherry picked colloquial ‘evidence’ about declines in poker machine use and alcohol sales in areas where the card program has been tested, reports of increases in other serious crimes in those areas, where robberies and assaults have increased by up to 200%, have been ignored and gone unreported as desperate people have sought the cash or valuables, such as jewelry and electrical goods, they need to make necessary purchases or that can be traded for cash. In the light of the considerations raised above, the question is then, ‘what is the real purpose of the welfare card program?’

There can be little doubt that the answer to this is the provision of donations to the LNP. In effect, LNP members and supporters are obtaining benefits from government funds that are intended for the welfare of Australian citizens. Public money is being transferred to private individuals and corporations with deep connections with the LNP in exchange for no apparent benefit to the public and in exchange for donations to the LNP. Unfortunately, with this very weak democracy we have in Australia, there is no way to hold those involved in this scheme to account or to have any corruption investigated independently or prosecuted at a federal level.

No federal ICAC exists. Only the Federal Police can investigate corruption as the criminal offence of defrauding the Commonwealth. Given that the Federal Police are controlled by the LNP Government and given the LNP is the very party that is benefiting from the card program, and given that the Federal Police are beholding to that LNP far right for their funding, any such investigation by the Federal Police is unlikely to ever occur. However, it may be possible to challenge the award of the contract to Indue on grounds of ‘unreasonableness' and perhaps 'bias' under the Administrative Decisions (Judicial Review) Act 1977 (Cth).The decision to award of the contract to Indue was 'unreasonable' on the basis that the trials were not completed or their outcomes assessed before the contract was awarded to Indue.

The decision was 'bias' because no open tender was used to award the contracts and because Indue is a donor of the Liberal Party and its members are LNP members or supporters. Hence, when awarding the contracts for the issue, implementation and management of the welfare card program, the Ministerial decision-maker preferred Indue to other possible suppliers due to the association of Indue with the LNP, that is, the political party in which the Minister for Human Services, Allan Tudge, who made the decision to award the contract to Indue, is also, necessarily, a member.  This is not a proper use of Commonwealth revenue and the Australian people would not support such conduct.

IT IS CORRUPTION DISGUISED AS PHILANTHROPY!

All credit to Michael Griffin ( Flinders Uni ) for this excellent  work on the unhealthy welfare card.

As the editor of this page I will say that I am aware that Larry Anthony is not allowed to lobby on Indues behalf through his SAS Lobby firm.That being said we must understand that he is also a man who had company ties to what seems to be always limited tender agreements with government. No one else gets to tender for the services that indue supply.